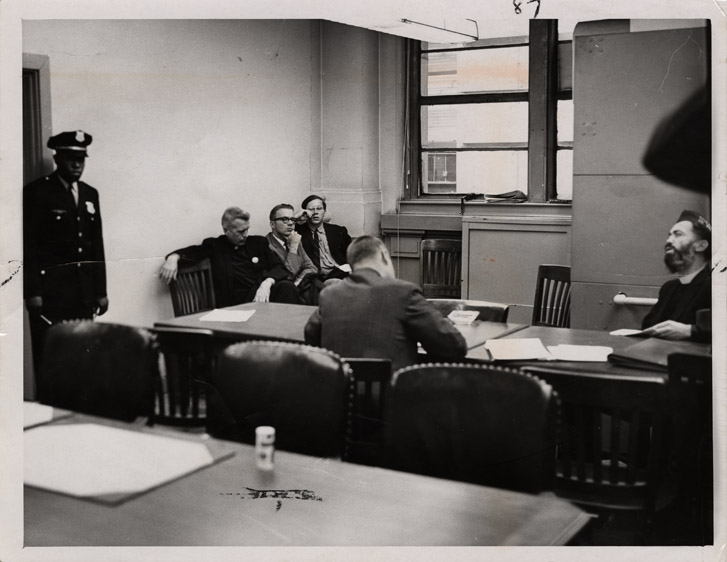 photo- from lf to rt- Phil, Tom, Dave, Jim being "arraigned?" Over the years I've thought of some captions for this photo: "Yes, we calmly await our fate", or, under the bureaucrat- :"What was it Pilate told me to do?"- from Jim Mengel- "For our next act? we're gonna blow this whole place up!!" He actually did say that what we or he would do next would make the blood pouring look like "peanuts"!!!
Because I look so "distant", am I saying, " Where am I? or,  What did I just do?" or just, "what comes next?" I seem sort of analytical and out of it- as do Tom and Phil- pensive. I swear I was in this very room later in my criminal justice work- but, maybe not- Courthouse East- the old Post Office- a building that figured momentously several times in my life. -110, 111 N. Calvert St. . We were young! We were on fire! We were changing the world! In a coat and tie? Couldn't I have looked a little more like Rod Stewart in the great rock group:  "Faces"?, or Brian May and Freddy Mercury in Queen? or the Muppets performing Queen's "Bohemian Rhapsody"? about which the fellow band member ? says: "It's one of those songs which has such a fantasy feel about it. I think people should just listen to it, think about it, and then make up their own minds as to what it says to them... "Bohemian Rhapsody" didn't just come out of thin air. I did a bit of research .....although it was tongue-in-cheek and mock opera. Why not?